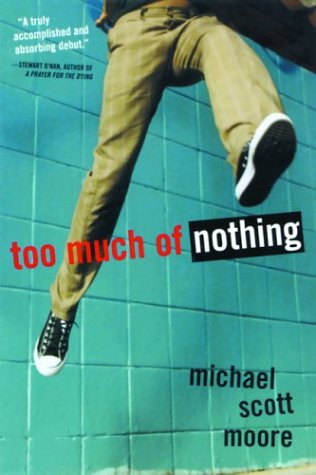 TOO MUCH OF NOTHING

Eric Sperling was killed 15 years ago, but instead of ascending to heaven like the narrator of , he is a troubled ghost in Moore's affecting debut. Eric spends his time haunting L.A., studying the mystical Jewish Zohar tradition at the local library and bemoaning his violent death at the age of 16. Most of all, he broods over his final months and his earthly relationship with his best friend and killer, Tom, a young hellion who acts out the "shlemielish" Eric's anarchic impulses, and Tom's sexually avid girlfriend, Rachel, who seduced Eric and most of the other male characters. Adrift in the moral vacuum of Reagan-era Southern California, the three laxly parented youngsters gravitate to the underground L.A. scene, where glamorous demimondaines elevate punk rock and drug dealing into a grandiose ideology of anti-establishment rectitude. San Francisco journalist Moore has an excellent feel for the worldview of these smart, awkward, yearning adolescents—their intense emotional attachments, their fumbling efforts at self-definition through pop culture, the attraction they feel to inappropriate adult mentors (trust-funded tattoo artists, Rastafarian beach bums) who promise to initiate them into adult mysteries without saddling them with adult responsibility. At times he overloads the high school melodrama at the book's core with philosophical and political baggage, linking it to everything from the Bhagavad-Gita to gentrification and the Nicaraguan Contras. But it remains a satisfying bildungsroman, combining a wry but heartfelt take on teen passions with a serious ethical concern for the fine line between freedom and nihilism.