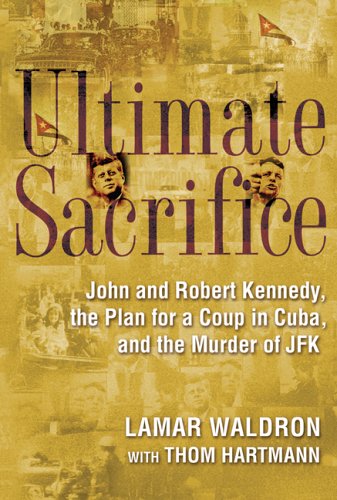 Ultimate Sacrifice: John and Robert Kennedy, the Plan for a Coup in Cuba, and the Murder of JFK

There has been a long hiatus in significant books on the JFK assassination since Gerald Posner's argued in 1993 that Lee Harvey Oswald acted alone. Posner took the CIA's lack of involvement for granted, and that, according to this mammoth and painstakingly researched account, was a big mistake. It is Waldron and Hartmann's ( ) contention—bolstered by access to many previously unavailable files, and interviews with little-known as well as prominent figures—that the CIA knew a great deal about the assassination. But the agency couldn't admit what it knew because that could uncover the existence of a U.S. plan for a coup in Cuba, run by JFK's brother, Attorney General Robert Kennedy. The assassination, say the authors, was carried out by hired gunmen on the orders of three noted Mafia dons whose lives were being made miserable by RFK's ruthless pursuit—and these Mafia men knew about the planned invasion because they had worked with the CIA on previous efforts to topple Castro. Oswald, long a hidden CIA agent, was set up as the patsy, and it had always been Jack Ruby's job to eliminate him if he wasn't killed at the scene of Kennedy's shooting. How do the authors make their case? With a relentless accumulation of detail, a very thorough knowledge of every political and forensic detail and the broad perspective of historians rather than assassination theorists. They spend perhaps too much time with people they admire, like the late Enrique Ruiz Williams, who was a crucial early source for them. They also cannot resist chasing stories of only marginal relevance to their principal one, like what really happened to Che Guevara in Cuba. But no future historian of that tormented period in American history will be able to ignore their very convincing presentation, even if a lay reader may feel overwhelmed by the sheer weight of the evidence. B&w photos.