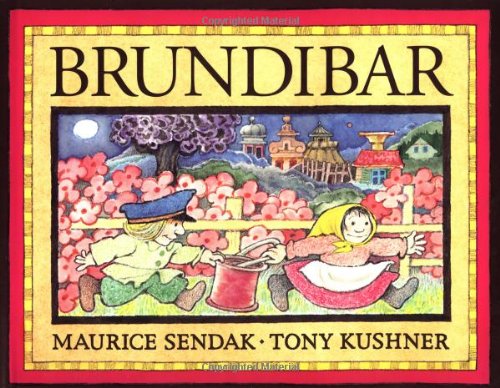 Pulitzer Prize-winning playwright Kushner adapts this allegorical tale from a Czech opera created by Hans Krása and Adolf Hoffmeister in 1938 (see Children's Books, Oct. 27). A doctor wearing the Star of David on his jacket dispatches siblings Aninku and Pepicek to town to find milk for their sick mother. Sendak, in a mix of fantasy and reality elements reminiscent of his (especially the cameo appearance of a baker), thrusts the siblings—and readers—into an exotic backdrop of stone buildings topped by spires and turrets, but with familiar details such as a horse grazing behind a picket fence and a field of flowers. The two try to earn money to buy the milk, but their voices are drowned out by the noise of the "bellowing Brundibar"; Brundibar's refrain ("Little children, how I hate 'em/ How I wish the bedbugs ate 'em") exemplifies Kushner's skill at tempering the potentially frightening with the comic. The dialogue and comments featured in balloons above the characters also inject an appealing spontanaeity and levity to the proceedings. A trio of talking animals and 300 children come to the duo's aid. Working in colored pencils, crayons and brush pens, Sendak conjures bustling Slavic city streets and effectively juxtaposes innocence and evil in the cherubic visages of the children and Brundibar's ominously hyperbolic facial features (the villain's manicured mustache calls to mind the reigning tyrant of the time). Despite a final threat from Brundibar, the story is ultimately one of hope, as the children and their allies band together to defeat the evil foe. The collaborators wisely allow readers to appreciate the story on one level, yet those familiar with the opera's origins (a note in the flap copy tells of Krása's death at Auschwitz) will find a haunting subtext here. All ages.