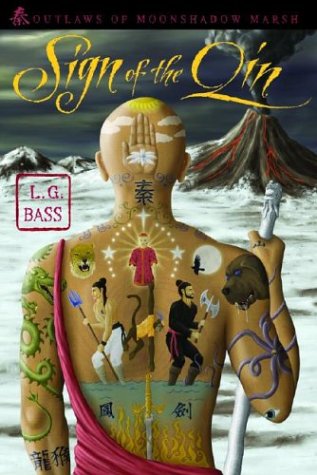 Bass's ( ) sprawling eastern fantasy, the first in the planned Outlaws of Moonshadow Marsh trilogy, conjures in its confident tone and authoritative use of legend, archetype and spiritually-based martial arts tradition. In a realm partially inspired by ancient China, mankind teeters on the verge of destruction as the Lord of the Dead, Yamu, works to arise and blanket the world in chaos; his servant, the evil Emperor Han, fathers a son, but the boy is born with the Sign of the Qin, a mark carried by the noble outlaws who work against Han. Fearful, Han exiles the boy's mother and tries to kill the boy, who may be the prophesied reincarnation of the Starlord, savior of humanity. The gods become involved, assigning the trickster Monkey to protect the boy; while Han's and Yamu's minions seek out the young Prince, so too does his mother. She in turn is aided by the fascinating Tattooed Monk, the scholar-warrior whose tattoos shift to offer signs and omens. However complex, these threads of the story line still don't scratch the surface of this densely layered, multi-faceted novel. Bass's cosmology borders on the encyclopedic; her book reads like an exploration of an ages-old mythology rather than the invention of a new one. Fantasy readers looking for a break from conventional swords and sorcery will likely become enthralled. Ages 10-up.