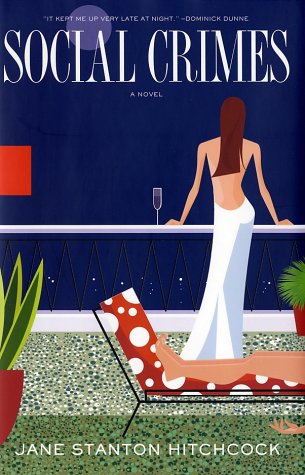 How does Hitchcock's amusing saga differ from the scads of books involving money, murder and high society? There's the economy and wit of her prose ("murder was never my goal in life," heroine Jo Slater begins), and then there's Jo's awareness of how silly the upper crust is ("if you're nice and you lose all your money, you're out. But if you're a sh-t with a private plane, you're in"). Playing on the tried and true theme of the older wife being dumped for the young miss, Hitchcock () offers a funny, lightweight tale. Jo is living the life: she's married to a billionaire, owns a sumptuous apartment in Manhattan, a rambling home in the Hamptons and a magnificent collection of 18th-century art. Things are just perfect until pretty young thing Monique de Passy enters her world (seemingly as a friend), Jo's husband dies, and Jo learns that he's left his estate to none other than the charming French countess. What follows—and constitutes the bulk of the book—is Jo's attempt to frame Monique as a seductress and murderer. Her approach is, for the most part, honorable. Jo is smart and has plenty of connections, and even though her financial situation becomes dire after her husband's death (she takes cabs instead of limousines and wears old couture dresses to parties), she holds her head high and eventually triumphs. Hitchcock's prose is airy and her plot moves quickly, making this a quintessential beach book.