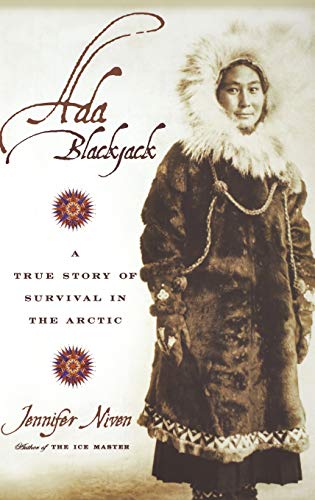 ADA BLACKJACK: A True Story of Survival in the Arctic

The beauty of Niven's tale (after ) reveals itself slowly, in hard-to-find bits and pieces, mirroring the piecemeal dawning of dread that blanketed the book's five protagonists one winter in 1923 on a bleak Arctic island. The explorers—four young white men from the U.S. and Canada and Ada, a 23-year-old Inuit woman—set out under a Canadian flag to claim a barren rock in the tundra north of the new Soviet Union for the British Empire. But with a lack of proper funding; a grandstanding, do-nothing Svengali of a leader; and an inexperienced crew, the mission was doomed from the start. Niven's hero is the slight, shy Blackjack, who, though neither as worldly wise as her companions nor as self-sufficient, learns to take care of herself and a dying member of her party after the team is trapped by ice for almost two years and the three others decide to cross the frozen ocean and make for Siberia, never to be seen again. By trapping foxes, hunting seals and dodging polar bears, Blackjack fights for her life and for the future of her ailing son, whom she left back home in Alaska, and for whose health-care expenses she agreed to take the trip. When she returns home as the only survivor, the ignoble jockeying for her attention and money by the press, her rescuer and the disreputable mission chief (who sat out the trip) melds with the clamor of city life (in Seattle and San Francisco), leaving both the reader and Blackjack near-nostalgic for the creaking ice floes and the slow rhythms of life in the northern frozen wastelands. Photos not seen by .