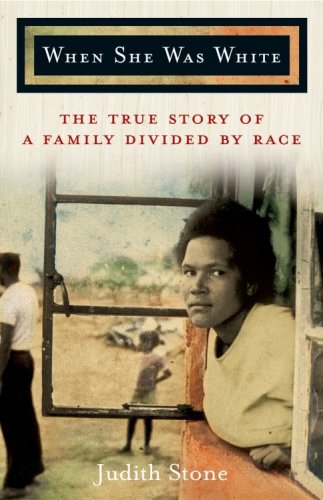 When She Was White: The True Story of a Family Divided by Race

The Sandra Laing case made international news as an example of South Africa's apartheid at its nuttiest, when, in 1966, the nine-year-old Laing, who was significantly darker than her white-skinned parents, was reclassified as Coloured and expelled from the white school she was attending. At 11, she was classified white again, and at 26, through her own efforts, became Coloured again. Laing had a hard life, especially after she ran away from home at 14 with the first of a succession of married black men. Although an anti-apartheid poster child outside of South Africa, Laing's memory so often fails her that Stone's book becomes an exercise in recovered memory, coupled with a reliance upon the remote expertise of various "lawyers, historians, geneticists, sociologists, psychologists, and some of the South-African journalists who'd covered her story over the years." Stone is at her most successful in eliciting recollections of misery and family strife. She fills in the blanks with "official documents, government records, newspaper archives, and interviews" with Laing's friends, family and other community members. But Laing is, unfortunately, too frail a vessel upon which to hang all this, along with digressive minilectures on genetics, history, anthropology and economics.