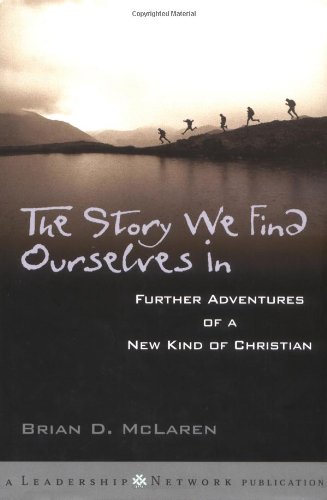 THE STORY WE FIND OURSELVES IN: Further Adventures of a New Kind of Christian

McLaren's set the evangelical community abuzz in 2001 by exploring weighty ideas about faith through the vehicle of fiction. In his gentler follow-up, which intentionally reads more like an extended conversation than a gripping novel, McLaren brings back as protagonists pastor Dan Poole and spiritual guru (and now certified naturalist and tour guide) "Neo" (Neil Oliver). "Sometimes, I think the Bible is more of a question book than answer book; it raises questions that bring people together for conversation about life's most important issues," muses Neo. Using the device of Neo conversing with spiritual seekers, including an Australian woman who is battling cancer, McLaren tackles age-old questions about Christianity, including, "Before the beginning, what was God doing?" The conversations discuss the relevance of other religions, the authenticity of miracles and the work of Christ on the cross. The backdrop of the Galápagos Islands provides Neo the opportunity to discourse on creation, evolution and a Christian's responsibility to care for the planet. McLaren's characters' awe of Neo can be wearing at times, as when Dan reflects, "What Neo explained next was so fascinating that I could hardly sit still." McLaren tends to overuse parentheses—there are seven sets on a single page—and some portions of text feel inserted, rather than well-integrated. However, like the first volume, this book offers an excellent opportunity for Christians to rethink why they believe what they believe.