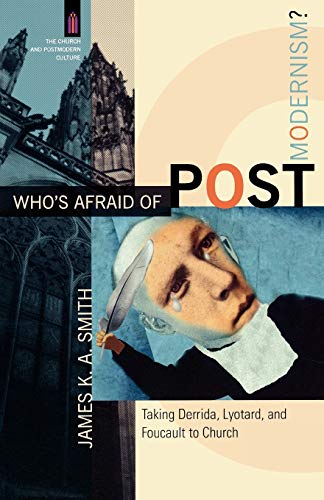 Who's Afraid of Postmodernism?: Taking Derrida, Lyotard, and Foucault to Church

Christians who think that "Lyotard" is something worn by gymnasts ought to investigate this unusual book, which aims to make accessible the philosophical and religious contributions of three postmodern thinkers: Jacques Derrida, Jean-François Lyotard and Michel Foucault. Smith, a philosophy professor at Calvin College, does this cleverly by employing illustrations and examples from such films as ; ; ; ; and, surprisingly but successfully, Along the way, Smith also dissects the popular teachings of postmodern writers like Brian McLaren (reviewed and interviewed in this issue), Leonard Sweet and Robert Webber. At times, the language is decidedly academic ("heuristic," "metanarrative" and "epistemology" make routine appearances), and the book tends to assume a basic familiarity with philosophical debates. Still, it's one of the most accessible introductions to postmodern thought to date, and its concluding chapter—in which Smith brilliantly employs the movie to explore how Christianity might be simultaneously faithful to tradition and open to change—is alone worth the price of admission. Ironically but persuasively, Smith argues that postmodern Christianity's most powerful contribution could be a return to ancient, premodern church traditions and liturgy