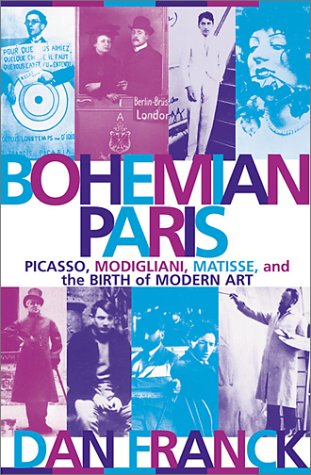 Franck, an extremely prolific French novelist, has produced some gloomy fictional narratives of wrenching relationships, a few of which have appeared in English (; ). He seems to want to lighten up here with a series of nonfiction anecdotes rife with novelistic invented dialogue. In three main sections, titled by neighborhood ("The Anartists of Montmartre," "Montparnasse Goes to War" and "Montparnasse, Open City,") a series of tales involving early 20th-century art movements like fauvism, cubism, dadaism and surrealism are recounted as if yelled artist to artist across the counter of a noisy bistro, as Franck assumes a deep familiarity with the subject. Leaping from writers Apollinaire, Cocteau and Hemingway to painters Modigliani, Picasso and Matisse, Franck drops names ponderously. His disavowal in the preface, "I am not an art historian" is not modest enough; there is little conventionally grounded history among these yarns of brawls, food –fights, drunken disputes—and art making. A poor translation does not help, with sentences like "Charlie Chaplin didn't come, and nor did Bergson or D'Annunzio" or " 'I forbid you to excite yourself with my women!' exclaimed Pascin." French culture buffs will be vexed by such formulations, while anyone not already familiar with obscure Parisian figures like the painters Foujita and Pascin will just be puzzled. 16 pages of b&w photos and illus. not seen by . ()