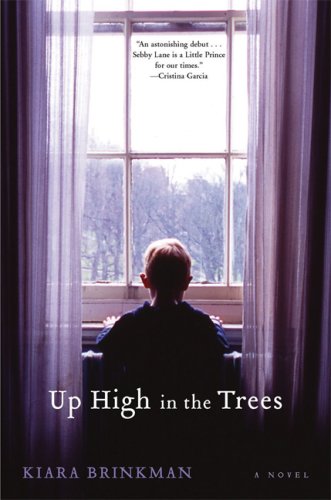 Up High in the Trees

he Asperger's afflicted narrator of Brinkman's sincere, sober debut struggles to cope with his pregnant mother's recent death after she was hit by a car. Already keenly sensitive to emotional and sensory stimuli, Sebby Lane finds his mother's loss almost unbearable; he acts out at school, biting a girl on the shoulder. Sebby's father, Stephen, is nearly unable to function, and, in an attempt to help both Sebby and himself, takes Sebby to the family summer home, hoping that a change of scenery will ease their mourning. Once there, however, Stephen slips ever deeper into his misery. Sebby, however, reaches out, writing letters to his teacher and befriending two unpleasant neighbor children. Though the narrative direction is muzzy and the conclusion is saccharine with forced uplift, the cast is portrayed with keen sympathy and sensitivity—no easy task with a young, on-the-spectrum narrator. Told in brief poetic vignettes, the novel moves quickly and episodically, like a series of snapshots from the camera of Sebby's unique mind.