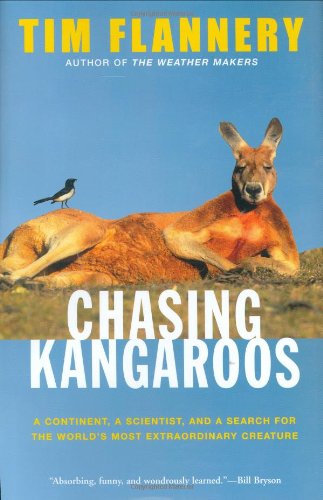 Chasing Kangaroos: A Continent, a Scientist, and a Search for the World's Most Extraordinary Creature

This paean to a remarkable animal by Flannery, author of the well-received global warming treatise , is fascinating but scattershot. The kangaroo, the only large animal that hops, can travel at speeds of 15–40 kilometers per hour. Female kangaroos, who carry their young in pouches, have two vaginas, but don't give birth through either of them, and are always pregnant, because they mate a few hours after their young are born. There are 70-odd species of kangaroo: some drink salt water; others live in trees. But as a paleontologist, Flannery is obsessed with finding out when and where the first kangaroos lived. Much of the book is about his searches for the fossils of extinct species in remote areas of the Australian outback, where he discovered the remains of "the grandfather of all kangaroos," as well as the fossils of ice age giants, such as the short-faced kangaroo and a carnivorous kangaroo. The accounts of his discoveries are engaging, but he covers too much ground, switching back and forth between physical descriptions, kangaroo evolution, reminiscences of his fossil hunting travels, worries about Australia's environment and the aborigines, and his controversial extinction theories. B&w and color illus. not seen by .