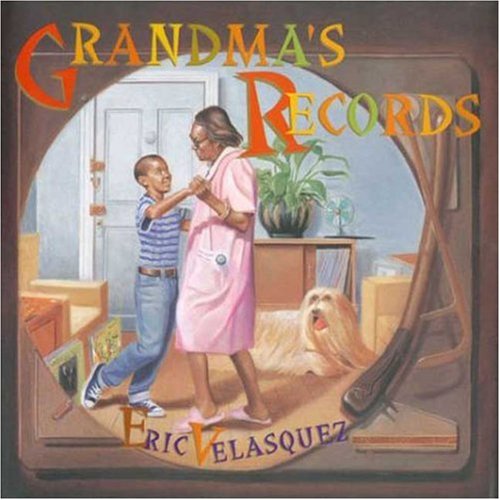 Making his authorial debut, Velasquez () proves himself adept at evoking time and place as well as a loving family bond. The narrator spends his boyhood summers at his grandmother's apartment in Spanish Harlem, where Grandma introduces him to the sounds of merengue and conga, dances with him and tells stories of growing up in Puerto Rico. Whenever she plays one special song, she puts her hand over her heart. Sometimes the boy sketches album covers, sometimes musicians come to visit, but the highlight of the summer is hearing "the best band in Puerto Rico" (Raphael Cortijo's combo) at a big theater in the Bronx. When the lead singer dedicates his grandmother's favorite song to her, the boy is surprised to see the whole audience put their hands over their hearts. Later, he learns that the gesture "show[s] that their hearts remain in Puerto Rico even though they may be far away." In the end, the boy is an adult, shown illustrating this book and listening to a CD, hand over heart. Velasquez comfortably introduces Spanish phrases, adds notes about real-life musicians and offers an aesthetically pleasing array of period album covers on the endpapers. His illustrations are realistic but quiet, toned down in their depiction of Grandma and her tidy, neutral decor—the music here emanates from the words. Ages 5-8.