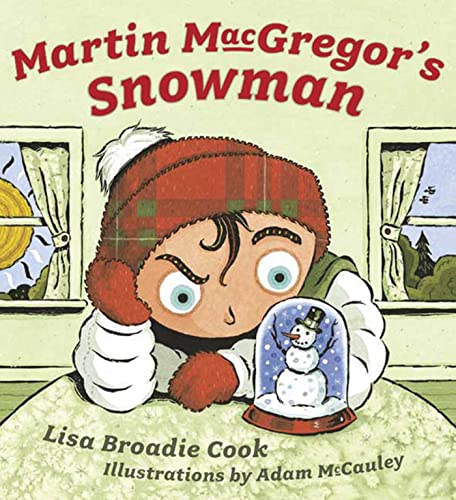 One warm winter, Martin MacGregor obsessively waits for snow. If he sees three marshmallows in his hot chocolate, he can't resist arranging them in a snowman shape. As he grows impatient, he glues cotton balls to the family pet ("Presenting... Sadie the snow dog!") and parades before his mother's book club covered in bubble-bath foam: " 'Look, everybody, a snowman!' he announced.... The bubbles began to slide downward at an alarmingly quick pace." Cook's children's debut humorously conveys the intensity of longing for something elusive; she styles Martin as a suffering artist who (until the last moment) works in everything but his desired medium. When his art teacher tells him he has "captured the true essence of a snowman" in a painting, he cries in frustration, "The essence of a snowman is " and tears the paper into white flakes ("Martin MacGregor waited for snow in the principal's office"). McCauley ( ) emphasizes Martin's enduring hopes by picturing him in a knit cap and puffy white ski jacket, no matter how sunny the weather. In tempestuous watercolors, which feature sinuous curves, explosive diagonals and dark, choppy outlines reminiscent of linocuts, Martin always has a calculating, not to say maniacal, gleam in his eyes. Thanks to an early spring blizzard, he finally channels his pent-up energy into snowman-building. Cook and McCauley invent a single-minded, sympathetic hero with determination to spare. Ages 4-8.