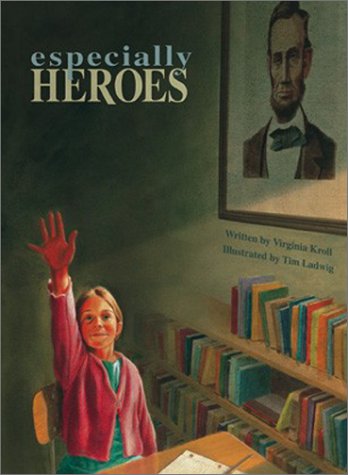 Set in 1962, this sensitive drama probes the concept of heroism from several points of view, including a Christian one. A class discussion about soldiers, including students' relatives who died in WWII, dovetails with a religious school lesson about martyrdom, inspiring the fourth-grade narrator to wonder if she values anything so much that she would risk her life for it. That night a pack of young white men terrorize her beloved African-American neighbor, Mrs. Hall, and, much to the girl's surprise, her soft-spoken father—so gentle that he "put jars over bugs and took them outside"—confronts the thugs with a baseball bat. The father's complexity helps make the case that heroism has little to do with bravado or mythic, superhuman personalities; it is ordinary people staying true to their ideals. Kroll () conveys this message with skill and restraint that falters only with Mrs. Hall's distracting, exaggerated dialect ("Your mama might be needin' something scrumptious, 'specially now with tryin' to keep up her energy and her milk for that littlest angel-baby"). Ladwig's () realistic paintings use light and dramatic perspectives to suggest the father's strength of character. However, he narrows the audience by emphasizing a Christian perspective: when the girl dreams of "soldiers and martyrs," foremost in his grouping is a Crusader. Ages 8-up.