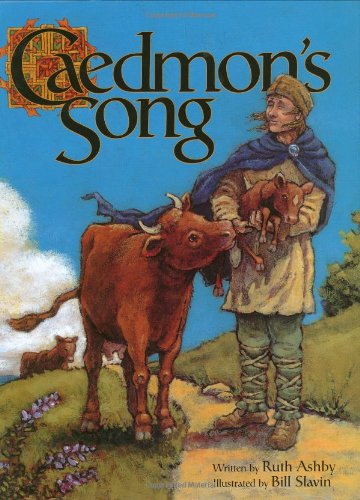 Though Caedmon is considered the first English poet, one wouldn't know it from his tongue-tied beginnings. So goes the legend presented in this biographical picture book. A humble cowherd on the grounds of a Yorkshire abbey, Caedmon was content to while away the hours with his bovine charges. Like most people of the time, Caedmon could not read or write ("Only the monks in the big abbey where Caedmon worked had books"), but, unlike many of his peers, he failed embarrassingly at reciting stories and poems (such as ) by heart. One night, however, he experiences a very special dream and finds himself filled with joy, wonder and the inspiration to compose and sing a beautiful hymn (eventually known as "Caedmon's Hymn") about Creation, something the Abbess and monks praise as a gift from God. His song prompts the Abbess to invite Caedmon to join the Abbey and to continue composing such songs of praise. Ashby's ( ) accessible tale spends a bit too much time emphasizing Caedmon's shortcomings and ordinariness, but young readers will likely find the brief profile of a little-known figure intriguing. Using textured acrylics, Slavin ( ) crafts bucolic scenes of the British countryside and its often gruff-looking inhabitants. His various portraits of Caedmon feature realistic expressions ranging from uncomfortably pained to peaceful. A biographical note includes additional detail, including information about Caedmon's Old English. Ages 5-up.