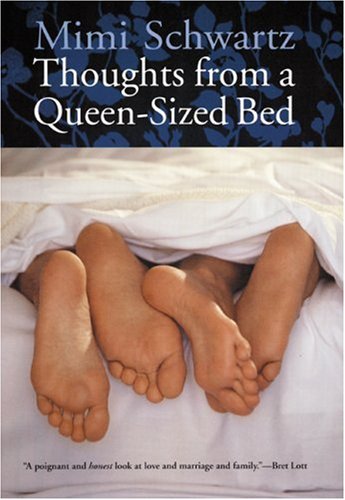 THOUGHTS FROM A QUEEN-SIZED BED

Schwartz (), a professor of writing at Richard Stockton College of New Jersey, has collected here some 40 loosely chronological vignettes from her rather comfortable life. Reading these musings is a bit like leafing through someone's photo album—here's her son's wedding, her mother-in-law's funeral, her mastectomy, her daughter's pregnancy. Apart from her bout with breast cancer and her husband's stroke, Schwartz has a reasonably happy existence, with none of the major difficulties—such as abuse, divorce, disability and depression—often found in memoirs. She dwells, therefore, on more mundane matters: gaining weight, her husband's medical problems, a cap she likes to wear when driving, squabbles with her husband over who forgot the road map and organizing family get-togethers. But a few gems surface amid the quotidian onslaught. Thinking back to her horseback-riding girlhood, she realizes that "tomboys who are over fifty and under ten" have similar feelings of independence and "self-containment." The single best story actually concerns her father, who grew up in a German village, ran away to join the Kaiser's army and snuck into one of Hitler's rallies before deciding that the family should flee to America. And her subtle glass-half-full outlook will appeal to Oprah's crowd: in "Negotiating Monogamy," she describes arriving at a balance "that does not necessitate leaping into someone else's bed, just the ongoing possibility of it." In spite of its attractive cover, this slim volume is unlikely to stir much general interest, although it may inspire some readers to try writing their own stories.