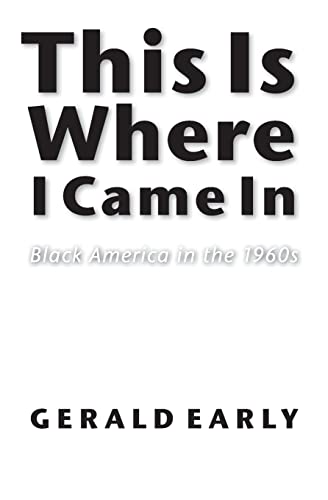 THIS IS WHERE I CAME IN: Black America in the 1960s

Despite its title, Early () quickly establishes that the three essays here are not autobiographical, but rather academic profiles—originally delivered as part of a university lecture series—of Muhammad Ali, Sammy Davis Jr. and Cecil B. Moore. Early sees the three men as symbols of America's self-conscious redefinition in the 1960s, and through them he offers a well-researched characterization of a decade for which Early professes no nostalgia. In the first essay, Early eschews narrative detail in favor of analysis, breaking down the charismatic appeal of Ali "in an era when black nationalism and color consciousness was intricately connected to masculinity." The profile of Sammy Davis Jr. is more gracefully written, threaded with stories and reviews that describe Davis's contradictions and the contradictory ways people responded to him, mirroring America's ambiguous identity in the 1960s and its paradoxical responses to race. Early's gifts as a scholar and writer are best displayed in the final essay on Moore, head of the Philadelphia NAACP at a time when the city was "a racial tinderbox." The match was struck when police intervened in a marital dispute and, fueled by rumors that the wife was pregnant and had been killed, the population burst into riot. Moore's ineffectiveness in stopping the violence, Early suggests, "intensified his desire for independence"; for the rest of his career, Moore distanced himself from political establishments and, by answering to no one, earned the trust of many in the black community. Early, who grew up in Philadelphia and remembers both Moore and the impact of his pressure politics, at last indulges in memoir, recalling the walls of the segregated Girard College and the racial slurs in the barber shop where he delivered papers. The essay is more poignant for it, and although the book ultimately succeeds in creating a portrait of 1960s America, readers may wish that Early had not been so faithful in his commitment to avoid autobiography.