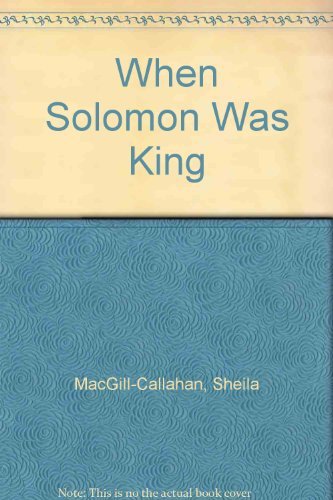 When Solomon Was King: 9

Johnson's (The Snow Wife) expressive watercolor and pastel illustrations light up this otherwise labored tale. Sparked by a snippet of Jewish folklore that claims King Solomon's ring enabled him to talk to animals, the story begins when the youthful Solomon, on a hunting party, takes pity on an injured lioness and her cubs. Years later, as a king, his wisdom and mercy have been eroded by pride; while he is on another hunting trip, an eagle reproaches him for hunting for pleasure. A lion attacks, but the king is saved by an aging lioness-the very one whose wounds he tended as a youth. MacGill-Callahan's (The Children of Lir) formal prose borders on the formulaic (e.g., ``I will keep the Sabbath here in the wilderness in the service of life''), and she focuses on moments of sudden personal transformation at the expense of a sustained narrative pitch. Johnson, on the other hand, packs an emotional punch with his sensitive portraits, their impact intensified by judicious use of light and shadow. Ages 4-8. (Mar.)
close
Details