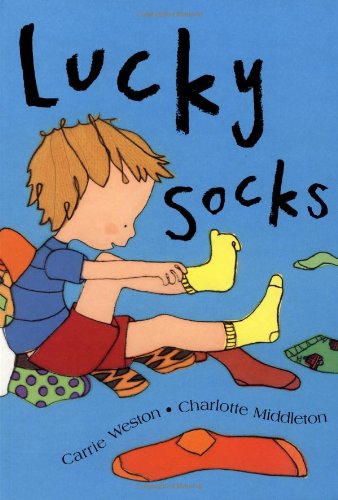 This promising tale from a British team starts out strong, then fizzles. Kevin believes that his yellow socks bring luck. When he wears socks of any other color, disaster strikes: he blames his green socks, for example, for his dismal performance on a spelling test, as well as his bike's flat tire. Yellow socks, on the other hand, win him a starring role (literally) in the school play and an invitation to eat ice cream in his friend's tent. Then the lucky socks go missing. Up to this point, the narrative shows a wry understanding of how kids often view themselves as cogs in the universe, and why the idea of luck can be so powerful for them. Middleton () emphasizes this deterministic perspective by placing cut-out drawings of her characters and their belongings against backgrounds of contrasting colors; she thus renders a visually distilled world in which no one seems on very sure footing. The book's resolution, however—his mother comes up with a substitute talisman, a pair of "old yellow underpants"—hits a false note. Wearing the underpants, Kevin stumbles and bumbles his way through a field day, but is given a medal "for trying very hard at everything—and never giving up!... Now Kevin doesn't mind what color socks he wears." The ending sounds like an adult's self-esteem pep talk, and breaks with the rest of the book's child-centered tone. Ages 4-8.