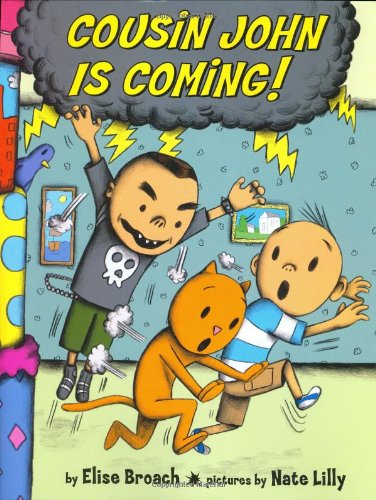 When Mom announces Cousin John is coming for a visit, the story's protagonists—a boy and his cat—experience a series of flashbacks and premonitions straight out of Grand Guignol. Unbeknownst to Mom, Cousin John is a bully par excellence. So while she's talking up the visit (hers is the only voice heard in the book) with bubbly exhortations such as, "for the whole weekend, we'll do just what you boys want to do," the heroes recall with horror the time John dangled them over an alligator pond, and gird themselves for upcoming games of pretend pirate play in which John will force them to walk the plank into a pit of porcupines and barbed wire. All seems lost until Mom reveals Cousin John's Achilles heel, which inspires the heroes to hatch plans of sweet revenge. The premise of clueless-adult-meets-evil-spawn-relative begins to wear thin about midway through the book. Readers may find themselves growing a bit numb to Cousin John's crimes, even when the visual litany is broken up with a few scenes of the underdogs triumphing. But readers will likely be won over by the hip, edgy and slightly sinister rendering style of debuting illustrator Lilly. His button-eye, expressive characters and humorous attention to detail recall classic comic-strip characters. Broach's ( ) chirpy, keenly observed text acts as an effective comic foil to her collaborator's vision of an all-in-the-family near-apocalypse. Ages 4-up.