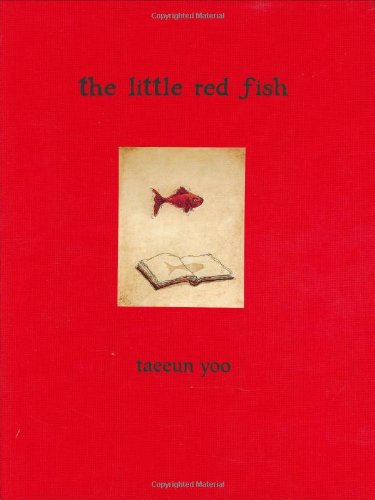 Newcomer Yoo's sepia-toned pen-and-inks and watercolor wash, rich with shadows and spidery figures, provide a haunting obligato for her story of a boy's adventure alone in a deserted library. The cloth-covered, jacketless book and handsewn pages suggest the attention to detail and craft found within. Falling asleep among the shelves after his grandfather, the librarian, leaves the room, young JeJe wakes in the moonlight to find that his beloved red fish (which he carries about in a goldfish bowl) has disappeared. "He caught a glimpse of a little red tail flipping high over a shelf and so he followed it." Movement from one of the books on the shelf catches his eye. Inked in vermilion, the red fish and the red book stand out against the neutral background, as a series of wordless spreads follows. JeJe takes the book down, opens it, and is greeted by a fountain of fish just like his. Diving in, he travels through a wintry landscape, then sails across an ocean with a flock of flamingos in an image that recalls Japanese silkscreen landscapes. He and his fish land safely in the library just as JeJe's grandfather returns to fetch him. "He whispered to his fish that they would come back to the library very soon." Like Barbara Lehman's work, of which her fans might be reminded here, Yoo's exhilarating visual images don't really need words. They seem to call to a place beyond language, and shutting the book feels like awakening from a dream. Ages 4-up.