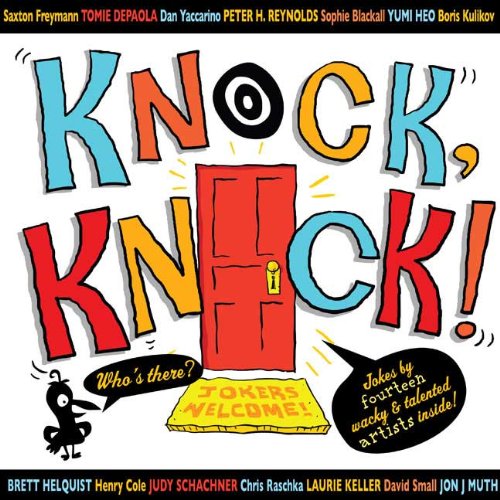 Fourteen prominent picture book creators try their hands at knock-knocks in this follow-up to Each contributor gets the front and back of a page for the “Knock, knock!/ Who’s there?” set-up and punch line. Tomie dePaola pictures a tropical-themed home with “Gorilla” tapping at the door. At the call of “Gorilla who?” an ape sweeps in to hug his hirsute sweetheart: “Gorill-a’ my dreams, I love you!” In a contemporary vein, veggie photographer Saxton Freymann takes the “Lettuce/ Lettuce who?” dialogue at face value. With their black-eyed pea eyeballs, stalk noses and leafy mouths, two heads of greenery demand, “Lettuce in!” Dan Yaccarino pictures an alien astronaut asking, “Peeka who?” and gingerly opening a space-hatch to a cheerful orange monster with 17 peepers (“Peek-a-boo, my eyes see you!”); in Brett Helquist’s nursery send-up, two placid pigs get a visit from a big bad wolf named Ima (“Ima gonna huff, Ima gonna puff…”). Of his peers, Henry Cole achieves perhaps the best nonsense spirit, drawing out the “Esther who?/ Esther Bunny!” joke for six go-rounds and a dozen panels. Chris Raschka pays homage to Maurice Sendak (“Verdi who?/ Verdi Vild Tings Are!”); and Boris Kulikov answers “Amos who?” with a giant, surreally creepy insect and the reply “A mosquito bit me!” Perhaps inevitably, the book offers a decidedly mixed bag; however, pint-size comics—for whom no knock-knock joke is ever too stale—will see gems where adults find the groaners. Ages 4-up.