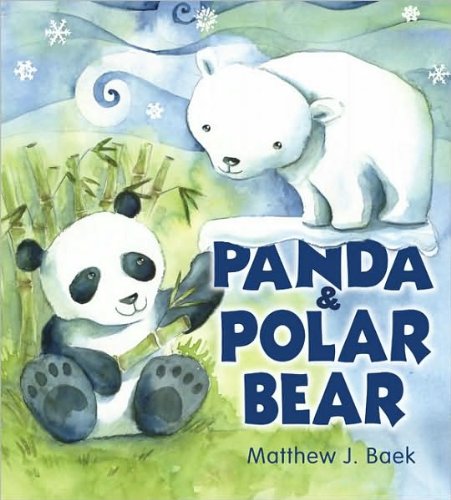 In Baek’s ( ) second outing, a cuddly polar bear tumbles down a cliff into the “green and grassy” world of a panda. There’s an early case of mistaken identity, with the now-muddy polar bear resembling a panda himself; when he’s washed clean, he worries that his new buddy might reject him: “What terrifically splotchy panda bear would want to be friends with a plain white polar bear?” (His fears turn out to be unfounded.) When the polar bear gets homesick, they make a ladder out of bamboo so the polar bear can climb back up the cliff (“My mother told me never to play with food... but I think it’s okay this time,” the panda decides). The final spread pulls back to reveal a zoo, with the polar bear exhibit overlooking the pandas. It’s a quiet book—a feeling echoed in the serene green and blue watercolors—but Baek’s pacing is steady, his artwork is nicely balanced against the text and the issue of difference in friendship is treated with respect. Ages 3–5.