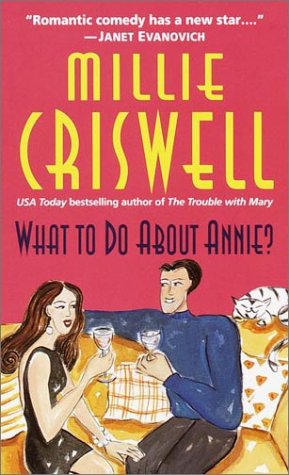 WHAT TO DO ABOUT ANNIE?

The eccentric Russo clan from Criswell's first contemporary romantic comedy, delights readers once again with their insatiable wit and boundless spirit. This time, however, the Russos share the stage with the Goldmans. Having grown up in Baltimore's Little Italy with a Jewish father and an Italian mother, Annie Goldman feels caught between two worlds and is determined to flaunt her individuality. She dyes her hair a different color daily and drives Father "what-a-hunk" Joe Russo crazy with her curve-hugging clothes. Annie once dreamed that she would have a future with Joe, but her hopes were dashed when he left her to join the priesthood. Now, 15 years later, Joe has decided to hang up his rosary beads and give love another try, but Annie isn't sure if she can trust him again. While the two attempt to rekindle their romance, Annie becomes a part owner of her father's outdated clothing store and an unwilling host to her cousin Donna. Joe has his own problems to contend with as well—namely, his domineering mother and her matchmaking machinations. Criswell's dialogue is sharp and humorous, and her colorful characters liven up the narrative. Although Criswell is better known for her westerns, this is a tantalizing tale that her fans will eagerly embrace.