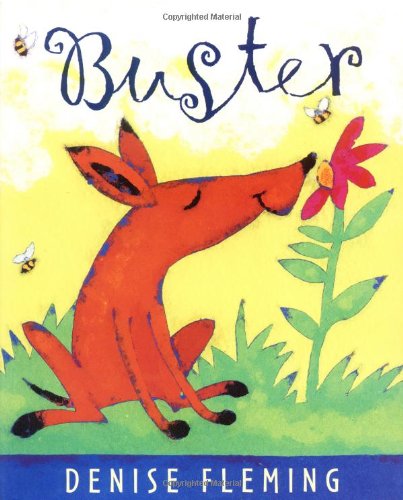 Two's a crowd when a feline interloper disrupts a contented pooch's way of life in this clever cross between picture book and chapter book. Buster lives a dog's life, to be sure. He loves his "dishes with his name painted on them in curvy letters," his large grassy yard and Brown Shoes, the owner who takes him to the park whenever he asks. But this ideal picture changes the day that "the big box" arrives—containing not spicy sausages, as hoped, but a white cat named Betty. The furry new addition tries her best to get Buster's attention ("She slept in Buster's dishes with the curvy letters. Buster ignored her. She ran up and down and around Buster's tree. Buster ignored her") but Buster reaches his limit and runs away, only to get lost in an unfamiliar park. It's Betty, in surprising fashion, who leads Buster home. Fleming () brings a cheerful childlike tone to her text, along with abundant touches of humor and tenderness—and a clear understanding of pet (and child) dynamics. In a fresh-looking style that will especially appeal to beginning readers, she breaks her tale into brief "chapters," each bearing a title suited to the scenario ("The Big Box," "Lost," etc.). Her signature colored-pulp paintings exhibit a smooth confidence as Fleming varies her compositions from full-bleed spreads to spot illustrations, all in a joyous palette dominated by snappy greens and yellows. Buster, a lively auburn pup who looks like he could be part fawn, is a scene-stealer with his expressive eyes and lifelike movements. And Buster won't be the only one happy to see ball-of-fluff Betty at book's end. Ages 4-7.