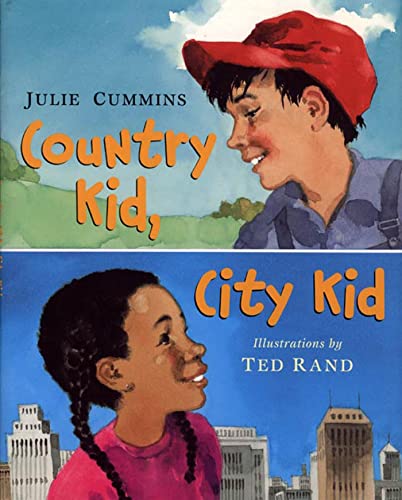 Ben lives on a cattle farm and Jody lives in a melting-pot metropolis, but as Cummins () and Rand () see it, the ostensible differences in landscapes leave plenty of common ground. For example, each wakes up to noises outside the window. Ben "hears cows mooing and birds singing," while Jody "hears taxicab horns and fire truck sirens." The narrative continues to compare and contrast their everyday lives, until the final spreads, when the children meet at Camp Eagle Ridge and become fast friends. "Country kid, city kid—miles apart, but two of a kind," sums up Cummins, while Rand shows the two happily paddling a canoe together. Despite something of a dulling effect from the dyad structure and rather perfunctory treatment of Jody and Ben's friendship, this book possesses a vintage charm. The earnestly cheery, realistic watercolors focus on what may seem exotic to outsiders—Ben's chores tending cows, Jody and her mother's shopping at side-by-side Asian and Italian groceries; Ben's travel to a bookmobile stop, Jody's solo ride on a city bus. Youngsters will likely enjoy this welcoming approach to contrasting lifestyles. Ages 4-6.