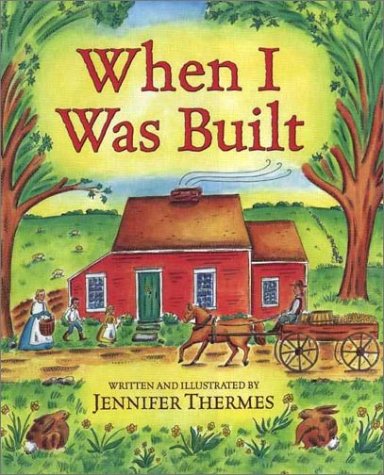 WHEN I WAS BUILT

It's not just the walls that talk in Thermes's first children's book—it's the entire house. "I watch the world pass by," muses the narrator, an 18th-century dwelling that has survived to the present day, "and sometimes think about the way things were when I was first built." A series of comparisons follow in which the house points out the advantages of sanitation and central heating, while also waxing poetic about the simplicity and the quiet of bygone days. In one scene of the house's present-day owners, a harried and caffeine-fueled mother deals with a fax machine, portable phone, computer and answering machine while her children dance to a portable CD player; on the opposing page, a considerably calmer gentleman writes with a quill. On another spread, the text notes that nowadays electricity "light[s] up the night with noise and chatter," in direct contrast to the original owners, 300 years ago, gathered cozily around the hearth, "talking or reading or telling stories, their faces aglow in the flickering candles." Thermes's crisp ink line and austere draftsmanship lend her pictures an elegant airiness. An attractive palette of homey colors—green, brick, gold—imbues them with a sense of both history and domesticity. Ages 4-7.