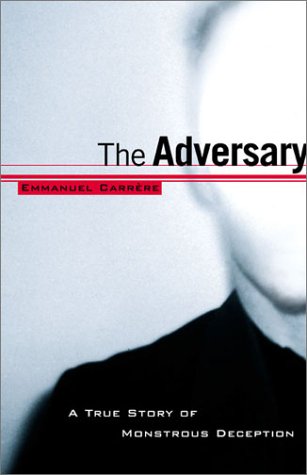 The Adversary: A True Story of Monstrous Deception

Those who knew Jean-Claude Romand knew him as a loving father and husband, a brilliant physician with a prestigious post at the World Health Organization and a good-natured, unassuming friend. So when in January 1993, Romand's wife, children and parents were all found dead, his acquaintances were stunned to learn that Romand was suspected of murdering them all. But as the police dug deeper, the motive for his actions soon became clear: neither a doctor nor an employee of WHO, Romand had been living a lie for 18 years and had supported his family primarily by swindling elderly relatives out of their retirement money. Recognizing that his imposture was on the verge of being exposed, he claimed that he killed his family to spare them the shame of learning the truth, and thenDintentionally or notDbotched his own suicide attempt. The story became a media sensation in France, and prize-winning novelist Carr re (Class Trip) reports feeling haunted by the similarities between the life Romand was ostensibly leading and his own, and he found himself almost compulsively drawn to the task of piecing together the identity of the real man behind Romand's deceptions. The resulting narrative is an absorbing, if deeply disturbing, account of an individual who, as Carr re concludes, had virtually no identity beyond the one he fabricated for himself. Carr re constructs a complex and admirably objective portrait of a man who, after botching a single medical exam, found it so difficult to admit his failure that he constructed an increasingly elaborate fabric of lies. While occasionally waxing melodramatic at odd moments, this is a literate and intelligent account of a perplexing story. (Jan.) Forecast: Carr re's book was a huge bestseller in France. Without the headlines to support it, it won't achieve that level of success here. Still, taut and fascinating, this should be well and widely reviewed and, as Carr re will be touring the U.S., should have lively sales not only among true crime buffs (the publisher will target mystery bookstores), but among all readers intrigued by the idea of a fabricated life.
close
Details