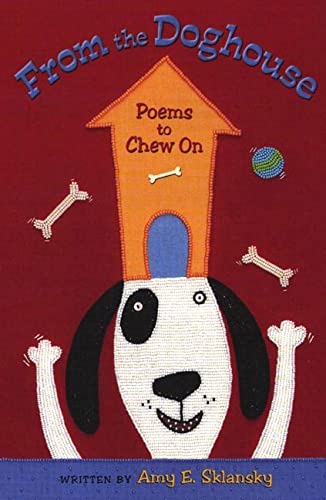 FROM THE DOGHOUSE: Poems to Chew On

Nifty beaded and appliquéd illustrations distinguish Sklansky's (the ZOOMfun series) collection of 26 canine poems. Playful pups and precocious mutts (and frisky felines who make frequent cameos), rendered entirely in colorful, shiny beadwork, cavort across canvas spreads, highlighting different doggy endeavors. One dog negates his owner's hard work in "The Bath": "splash/ soap/ scrub/ mope/.../ mud/ run/ roll/ done!" Only the back half of a dog is visible in the illustration, which also shows the bubble-filled clawfoot tub out of which the dog has leapt. Much of the verse is rather uninspired ("I don't do the backstroke/ Or swim the butterfly./ Doggy paddle is my stroke—/ I'll bet you can guess why!"). The art, while created by four beaders, is uniform in style: tidy, cheerful, enhanced by simple embroidery. Crafters will be especially interested in the endnotes, which explain that about 120,000 beads were used to make the book and that each illustration took between 40 and 120 hours to create. Ages 5-up.