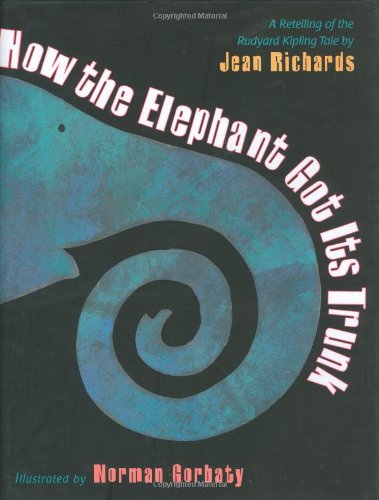 HOW THE ELEPHANT GOT ITS TRUNK

The team behind eloquently retells Kipling's classic tale, starring an endearingly snub-nosed, aqua-colored young elephant, bursting with curiosity. "Excuse me, please… Can you tell me what the crocodile eats for dinner?" she asks Giraffe, whose fuchsia spots and golden body stand out against a dark wood with dappled greens and teals that play off of the heroine's hues. She also asks Hippopotamus, whose pond similarly reflects the colors of the little elephant's physique. Unable to get an answer, she follows the Kolokolo bird's advice and sets off to find the object of her obsession on the banks of the "great, gray-green greasy Limpopo River." In answer to her question, the clever croc beckons her closer. Using a fold-out page, Gorbaty portrays the ensuing tug-of-war, which results in a new appendage ("Her little bump of a nose began to stretch, just like bubble gum"). Richards strips away the violence found in (in which the elephant is repeatedly spanked for his inquisitiveness); instead, her version plays up the spunky elephant's journey and shows children the joys of perseverance (she swats mosquitoes with her new nose and "She found she could also use her trunk as a trumpet: '"). Gorbaty's ethereal illustrations, layered with rich, transparent hues, create a mysterious mood that will draw young imaginations deep into the jungle, a place as colorful and as unforgettable as the mischievous Kolokolo bird. Ages 3-7.