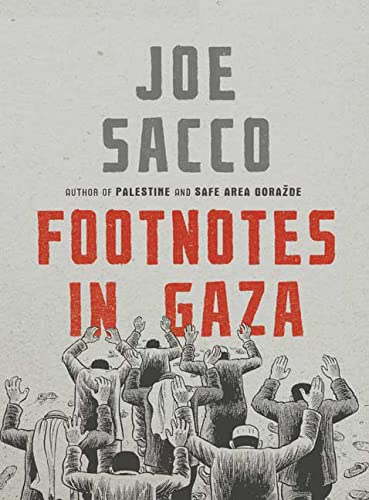 Having already established his reputation as the world's leading comics journalist, Sacco ( ) is now making a serious case to be considered one of the world's top journalists, period. His newest undertaking is a bracing quest to uncover the truth about what happened in two Gaza Strip towns in 1956, when aftershocks from the Sinai campaign may have resulted in the massacre of hundreds of Palestinian civilians by the Israeli military. Sacco first came across the stories during research in 2001 and was shocked to discover that, but for one brief mention, the incidents had never been fully investigated. The resulting book is a blow-by-blow retelling of how Sacco, on the eve of the 2003 invasion of Iraq, embedded himself in Gaza and set about interviewing every witness he could find who had been in the towns of Khan Younis and Rafah on those fateful days. Sacco's art is alternately epic and intimate, but he exceeds himself in the scope of his ambition (particularly in one sequence that shows in vivid terms how desert refugee camps from 1948 turned into the teeming slums of today). But it's his exacting and harrowing interviews that make this book an invaluable and wrenching piece of journalism.