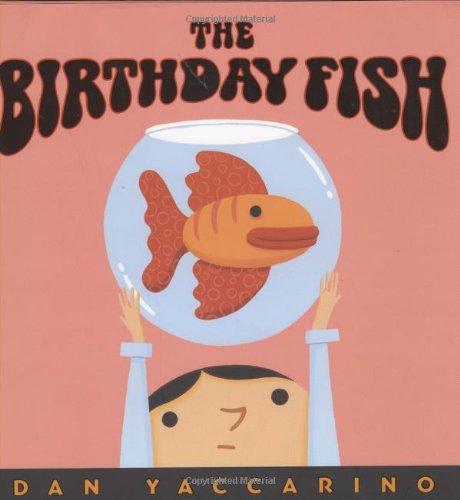 Cynthia "just knew" she would get a pony for her fifth birthday, "and she would name him Marigold." But the polka-dot box she receives is too small for a horse, and instead contains a globular fishbowl and an orange fish with scalloped red fins. In a move that could give readers the wrong idea about fish care, the disappointed Cynthia begins tipping the fishbowl into the sink, and reconsiders only when her new pet protests. Like the magical fish of the fairy tale, it promises, "I will give you what you wish for [in this case, two ponies] if you will take me to a lake and set me free." Cynthia promptly sticks the bowl in a stroller and heads lakeward, meanwhile protecting the fish from a cat and some roughhousing boys, sprinkling some food in its water and shading it from the noonday sun. As in his artwork for , whose cat and dog mistrust a family's new baby, Yaccarino shows a bond developing. After a long trek, Cynthia and the fish watch the sunset by the lake and she matter-of-factly says, "Let's go home now, Marigold." In his characteristic unmuddied palette, smooth paint surfaces and ovoid, lava-lamp shapes, Yaccarino crafts a story of friendship and acceptance. Ages 3-6.