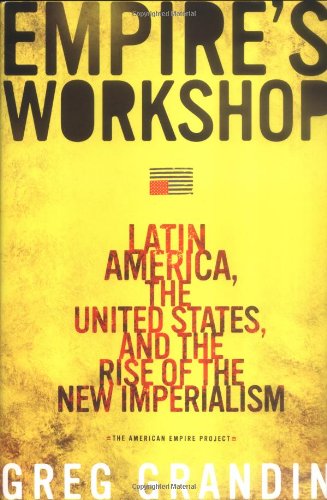 Empire's Workshop: Latin America and the Roots of U.S. Imperialism

America's post-9/11 policy of idealistic military adventurism has a long history, argues this incisive study. NYU historian Grandin ( ) sketches the vexed course of U.S. relations with Latin America, but focuses on the Reagan administration's involvement in Central America during the 1980s, when it backed the Salvadoran government in a brutal civil war against left-wing insurgents and the Nicaraguan Contras against the Sandinista regime. Then as now, Grandin contends, Washington justified a militarist stance by citing a threat to America (Communists advancing on the Rio Grande) and championing democracy and human rights. America did not send troops but did sponsor native death squads in El Salvador, and the author notes recent press reports that the U.S. military is sponsoring similar death squads in Iraq. Grandin's conception of American imperialism—covering everything from outright invasion to corporate investment and Fed interest-rate hikes—is too broad, and he overstates the importance of Central America in the making of the American New Right. But this timely book offers an analysis of the ideological foundations of today's foreign policy consensus and a cautionary tale about its dark legacy.