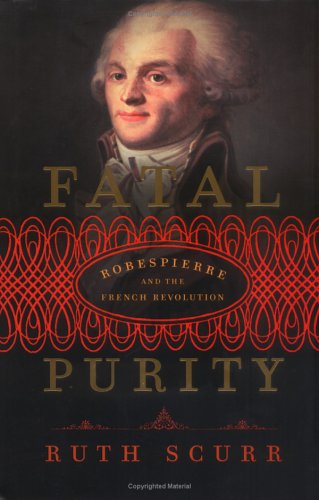 The short, violent life of Maximilien Robespierre was a mass of contradictions crowned with a supreme irony: this architect of the French Revolution's Reign of Terror would in July 1794 be executed by the same guillotine to which he had consigned so many others. Cambridge University historian Scurr says she has tried to write a biography that expresses "neither partisan adulation nor exaggerated animosity," but even she must conclude that with the Terror, he "kept moving through that gory river, because he believed it necessary for saving the Revolution. He can be accused of insanity and inhumanity but certainly not of insincerity." Robespierre can also be accused of being a revolutionary fanatic who hated atheists, and "became the living embodiment of the Revolution at its most feral"; a dedicated upholder of republican virtues whose hands were smothered in blood; a fierce opponent of the death penalty who helped send thousands to their deaths; and a democratic tribune of the people who wore a sky-blue coat and embroidered waistcoats so aristocratic they wouldn't have been out of place at the court of the Sun King. Scurr's first book scores highly in unraveling not only her subject's complexities but those of his era. 2 maps.