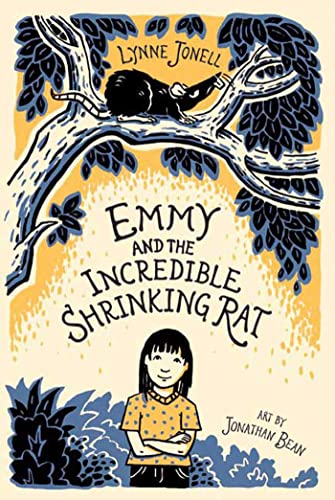 Emmy and the Incredible Shrinking Rat

Jonell's (the Christopher and Robbie picture books) first novel is a lustrous affair, a droll fantasy with an old-fashioned sweep and a positively cinematic cast. The beginning will hook readers right away: the class pet, a rat, mocks the protagonist for being too good. “It doesn't get you anywhere,” he tells her. “The only thing that happens is, you get ignored.” When the teacher doesn't even seem to see the girl a few pages later, the rat has made his case for being bad, and Jonell has launched a truly labyrinthine plot involving prodigally endowed rodents and nefarious schemers with entangled pasts. Emmy, the heroine, must face down evil nanny Jane Barmy and win back the love of her parents, former booksellers who, since inheriting Great-Great-Uncle William's fortune, spend all their time jet-setting and buying themselves the very best of everything. Her challenge increases when the rat—freed by Emmy, one of the few characters who can hear him talk—accidentally shrinks her to his size. Jonell's villains aren't too frightening to be good targets for jokes, and the rat serves as an excellent comic foil. Occasionally the eccentricities of the plot sidetrack the action or otherwise bog down the pacing, but for the most part the narrative proceeds at an assured clip. To top off the fun, Bean ( and , both reviewed above) decorates the margins with drawings that produce a flip-book effect: the rat falls from the bough of a tree, covering his eyes as he somersaults backward in mid-air to land in Emmy's outstretched hand. Ages 9-up.