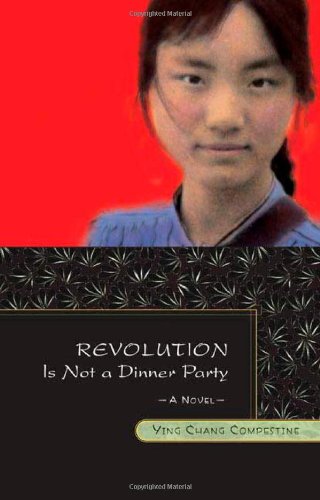 Revolution Is Not a Dinner Party

Picture book and cookbook author Compestine ( ) turns to 1972 China as the setting for her first YA novel. Eight-year-old Ling, the spunky daughter of two doctors, lives in Wuhan, China; dreamy and idealistic, she often describes her world in metaphor (about her neighbor, Ling notes, “Mrs. Wong was fragrant and warm like a red peony, which always welcomed visitors”). But the lives of Ling and her family are disrupted when Comrade Li, an officer of the Communist Party, moves into their apartment. Difficulties mount as friends and neighbors disappear, Ling’s father is arrested and she endures vicious tormenting at school because of her “bourgeois” background (“At times I wished my family was poor and my parents worked on a vegetable farm... so I could have friends. But if my parents worked on a farm, who would treat their patients?”). Although her father has been jailed, her family starved and their books burned, Ling fights to keep her long hair, a symbol of dignity and individualism to her, though her classmates see it as emblematic of Ling’s “privilege.” Ling survives on wit, hope and courage until the death of Chairman Mao, after which she and her mother have a joyful reunion with Ling’s father. Readers should remain rapt by Compestine’s storytelling throughout this gripping account of life during China’s Cultural Revolution. Ages 10-up.