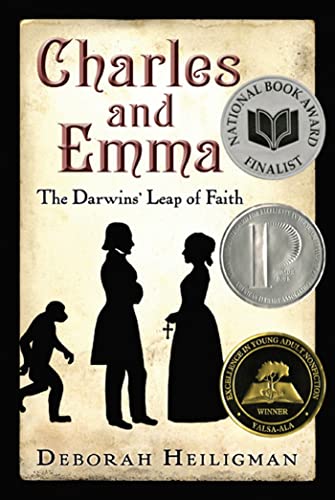 Charles and Emma: The Darwins' Leap of Faith

This rewarding biography of Charles Darwin investigates his marriage to his cousin Emma Wedgwood. Heiligman (the Holidays Around the World series) has good reason for this unusual approach: as deeply as they loved each other, Emma believed in God, and Charles believed in reason. Embracing the paradoxes in her subjects' personalities, the author unfolds a sympathetic and illuminating account, bolstered by quotations from their personal writings as well as significant research into the historical context. We meet Charles as he weighs the pros and cons of wedded life—but then seeks his father's advice (Darwin père urges him to conceal his religious doubts); Emma becomes a more fervent believer after the death of her favorite (and more religious) sister. Heiligman writes for motivated readers, and her style can be discursive (mention of a letter can introduce a few sentences on the British postal system). Her book allows readers not only to understand Darwin's ideas, but to appreciate how Emma's responses tempered them. Eight pages of photos, not seen by Ages 12–up.