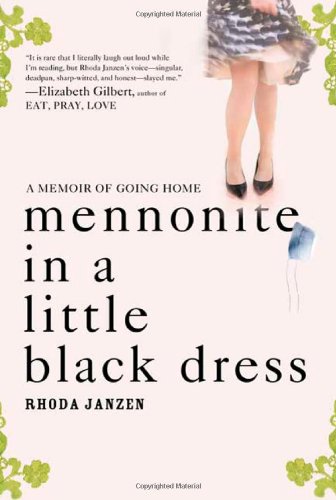 Mennonite in a Little Black Dress: A Memoir of Going Home

At first, the worst week of Janzen's life—she gets into a debilitating car wreck right after her husband leaves her for a guy he met on the Internet and saddles her with a mortgage she can't afford—seems to come out of nowhere, but the disaster's long buildup becomes clearer as she opens herself up. Her 15-year relationship with Nick had always been punctuated by manic outbursts and verbally abusive behavior, so recognizing her co-dependent role in their marriage becomes an important part of Janzen's recovery (even as she tweaks the 12 steps just a bit). The healing is further assisted by her decision to move back in with her Mennonite parents, prompting her to look at her childhood religion with fresh, twinkling eyes. (She provides an appendix for those unfamiliar with Mennonite culture, as well as a list of “shame-based foods” from hot potato salad to borscht.) Janzen is always ready to gently turn the humor back on herself, though, and women will immediately warm to the self-deprecating honesty with which she describes the efforts of friends and family to help her re-establish her emotional well-being.