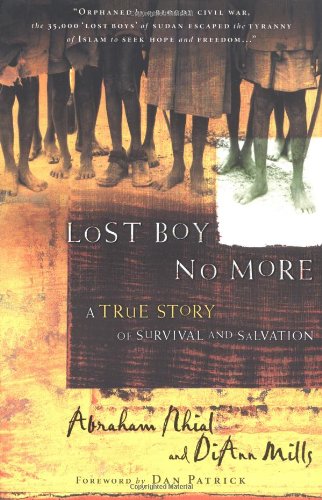 LOST BOY NO MORE: A True Story of Survival and Salvation

Nhial survived the unthinkable. Rebels attacked his village in southern Sudan in 1987, killing many dear to him. He ran into the jungle, meeting other "Lost Boys" and wandering with them for months, and survived by eating wild plants and even mud. He watched some of his companions attacked by lions and daily feared for his life. The Lost Boys—35,000 of them—found safety first in Ethiopia, and when attacked there moved on to Kenya, losing a great deal of their number in their escape across the Gilo River, where they were attacked by crocodiles, shot or drowned. Eventually, Nhial was one of the 4,000 relocated to the United States. He and the others dream of going back to rebuild Sudan into a peaceful and prosperous country. Nhial's story is told third-person, in Mills's voice, which drains its power. Numerous chapters in the middle of the book get weighed down with studies of Sudanese history, a comparison of Islam and Christianity (Nhial's own faith), details on the development of the Sudan People's Liberation Army, life in a refugee camp and the history of oil resources and slavery in southern Sudan. These facts are relevant, but they stop the progression of the story. The story is a page-turner; unfortunately, the book is not.