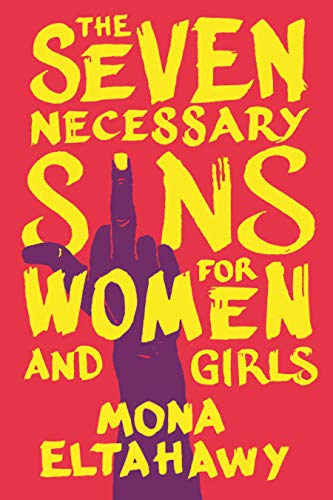 The Seven Necessary Sins for Women and Girls

In this fed-up, rage-fueled “big fuck-you to the patriarchy,” activist and journalist Eltahawy (Headscarves and Hymens) thrusts “tools to fight back” into the hands of women and girls: in themed chapters, Eltahawy exhorts her peers to embrace their power through the energy of anger, attention seeking, profanity, ambition, power, violence, and lust. She lets no one off the hook, calling out the Muslims who defended the man who sexually assaulted her while she was on hajj and the racist Americans who vilified Muslim men during her #mosquemetoo response, feminists who accept the crumbs offered to them by the patriarchy and promote milquetoast ideas of “girl power,” U.S. Republican white women complicit in misogyny and racism, and women who call for civility in discourse or who disavow violent responses to violence. But Eltahawy’s arguments come through with as much intelligence and clarity as passion and evocative imagery; they are built on facts about racism, capitalism, and homophobia, as well as her own and others’ experiences. Eltahawy not only gives frustrated women permission, but demands that they “defy, disobey, and disrupt.” This bold, rampaging manifesto is far past the edge of mainstream feminism, but it’s so viscerally motivational that even those more moderately inclined may find themselves intrigued. (Sept.)
close
Details