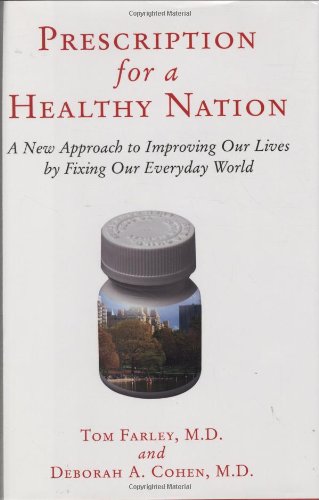 PRESCRIPTION FOR A HEALTHY NATION: A New Approach to Improving Our Lives by Fixing Our Everyday World

In this latest look at the poor state of America's health, Farley, a medical doctor who teaches at Tulane's School of Public Health, and Cohen, a scientist at the RAND Corporation, tell us once again that Americans are overweight, sedentary and indulgent in a host of life-diminishing habits, the abuse of tobacco and alcohol chief among them. These habits, along with Americans' propensity for serious accidents, lead to premature death for hundreds of thousands a year. In the authors' view, the ongoing miracle of medical science has produced in the American public a laissez-faire attitude to their own health; Americans can live as they choose and hope that the market will produce a cure to save them before it's too late. Since it is, in Farley and Cohen's view, our "physical and social environment" that's making us sick, we should make small changes in that environment to encourage health, such as lowering the price of healthy foods and enforcing such rules as a workplace ban on snack food in cubicles. Unfortunately, throughout this litany of human foibles and social and governmental failures, there's a pervasive tone of puritanical disapproval, and Americans are unlikely to pay attention to this pair of scolds.