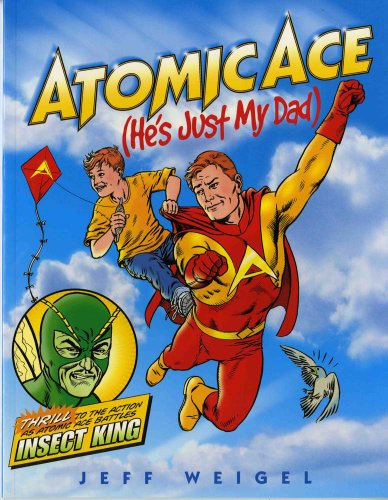 Comic-strip panels of a Spandex-clad "Atomic Ace" alternate with cozy images of Ace's family in this humorous look at a hero balancing work and home. The unnamed narrator is Atomic Ace's middle-school–age son: "I have to admit Dad's not like other guys:/ he's got nuclear powers, and sometimes he flies!" In rectangular insets, readers see Atomic Ace conferring with a police commissioner, while newspaper headlines track the jailbreak and dastardly deeds of the villainous Insect King. Meanwhile, full-bleed pages picture Ace (still in his skintight red-and-yellow outfit) relaxing at home with his doting wife and son. Ace sits in a comfy floral chair, scowling at the newspaper, while his son practices trumpet, then tucks the boy into bed. As it turns out, Ace will miss his child's band concert due to an ill-timed battle with the Insect King. The son, like many kids, admires his father but wishes they could spend more time together: "Dad's been busy these days—there's a tough case at work./ Some guy dressed in a bug suit is being a jerk." He gets picked on by classmates when Ace fails ("Atomic Ace Humiliated as Crime Spree Continues," the headlines taunt), but ultimately sees justice done ("Nuclear Knight Outsmarts Insect King"). Debut illustrator Weigel expertly inks and colors this semi-spoof to resemble a superhero comic.

Although the cutesy (and lengthy) rhyming verse makes the son seem a bit childish, the hard-boiled headlines and graphics capture the comedy of Ace's double life. Ages 6-9.