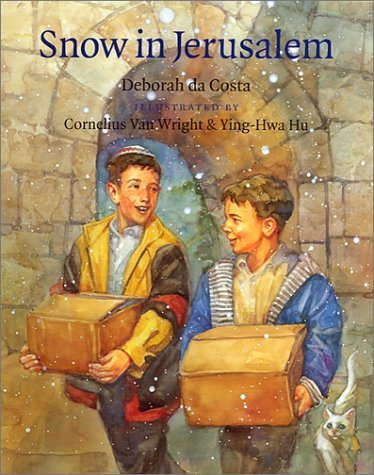 In her affecting but message-driven debut children's book, da Costa relays the story of two boys who live in Jerusalem's Old City—Avi in the Jewish Quarter and Hamudi in the Muslim Quarter. A fluffy white cat wanders between the homes of the two boys, relishing the scraps each feeds her. Then weeks pass without any sign of the cat, alarming each boy. Looking skinny and dirty, the cat at last visits Avi, who then follows her to Hamudi's neighborhood, where the youngsters begin to argue, each claiming the cat is his. As a rare snowfall begins, the boys stop bickering and, fearing that the beloved animal will freeze, follow her through Jerusalem to a dark alley where they discover four kittens in a box. As the mother purrs loudly and rubs against the boys, they conclude, "She does not want us to fight.... She wants peace." The watercolor art by this husband-and-wife team () balances precise, close-up portraits of the boys with softly focused backgrounds that depict the various cultural nuances of the setting. A glossary defines the Hebrew and Arabic words integrated into the text. Ages 6-10. (.)