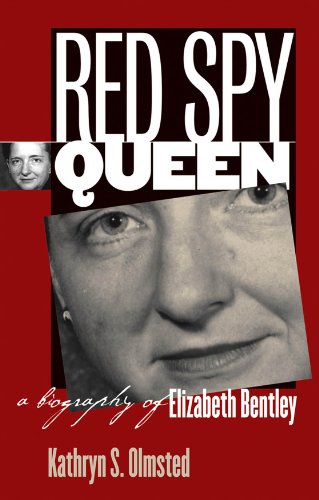 In August 1945, a 37-year-old woman named Elizabeth Bentley walked into the FBI office in New Haven, Conn., and announced that she was a Communist spy who controlled a vast network of agents operating within the U.S. government. Her defection precipitated the decade's first "Red Scare" and set off a chain of events that eventually led to the execution of the Rosenbergs. Despite her importance, however, Bentley has been largely ignored by history. Olmsted, an assistant professor of history at UC-Davis, corrects this oversight in an intelligent, balanced biography of the woman the tabloids labeled the "red spy queen." Bentley, Olmsted makes clear, was by no means a doctrinaire Communist. She joined the CP-USA primarily because she was lonely, and became a spy because she fell in love with a Soviet agent named Golos. Bentley helped Golos with his work; after his death, she took over many of his agents. But Bentley was too erratic and independent-minded for Moscow (and a hardened alcoholic as well). When she realized her Soviet masters were plotting her "elimination," Bentley went to the FBI and became what Olmsted calls a "professional ex-Communist," collecting sizeable speaking fees and frequently appearing before Congress and on TV and radio. But Bentley soon faded from the spotlight, undone by her emotional fragility and penchant for lying. When she died in 1963, the world took little notice. Olmsted's thoughtful account restores Bentley to her rightful place and gives her all the credit—and blame—she deserves. 12 illus.