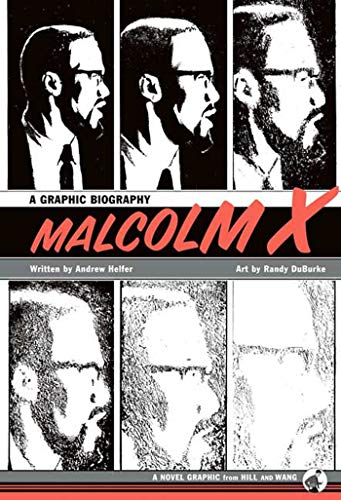 Helfer and DuBurke tell the story of Malcolm X's short life—his meeting with Dr. Martin Luther King Jr., the two leaders describing the opposite ideological ends of the fight for civil rights; and his eventual assassination by other members of the Nation of Islam (NOI)—in narration and detailed b&white drawings, sharp as photographs in a newspaper. The portrait is frank and at times unflattering, pointing out the inconsistencies in Malcolm X's own autobiography. From his slow slide into the criminal—moving from hustler to dealer to the head of a ring of thieves for which he was finally sent to prison—to his jailhouse conversion to Islam, Helfer and DuBurke don't shy from any part of their subject's life. Unfortunately, as the story gets into the complicated dynamics within the NOI and Malcolm X's eventual break from the group, the narrative becomes tangled. The same drawings that make Malcolm X's youth so vivid can't portray the political in-fighting with the same clarity, giving instead a glance at the last few years of his life. Nevertheless, Helfer and DuBurke have created an evocative and studied look at not only Malcolm X but the racial conflict that defined and shaped him.