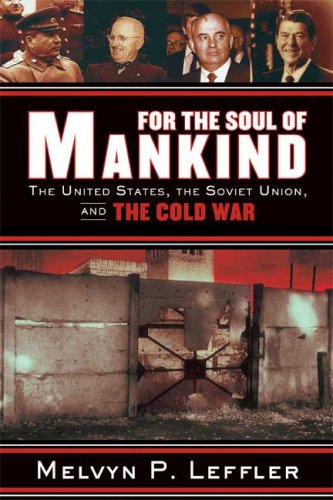 For the Soul of Mankind: The United States, the Soviet Union, and the Cold War

Drawing on extensive research in American and Soviet archives, Bancroft Prize–winner Leffler ( ) offers a scintillating account of the forces that constrained Soviet and American leaders in the second half of the 20th century. Leffler begins by admitting that he was shocked by the rapid demise of communism. If Reagan and Gorbachev could end the Cold War, why hadn't earlier leaders been able to do so? To answer that question, Leffler examines five crucial moments when Washington and Moscow “thought about avoiding or modulating the extreme tension” between them. At the end of WWII, Leffler says, Stalin thought that cooperation with the West might be preferable to entrenched hostility. Yet he and Truman were pressed by an “international order that engendered... fear” to make decisions that led to Cold War and shaped policy for decades. Leffler examines why Eisenhower and Malenkov couldn't wipe the slate clean after Stalin's death; how Khrushchev, Kennedy and Johnson reacted to the pressures of international allies and domestic political enemies; why détente foundered under Carter and Brezhnev, and what circumstances allowed leaders of the 1980s to focus on common interests rather than differences. Leffler has produced possibly the most readable and insightful study of the Cold War yet. 47 b&w illus., 6 maps.