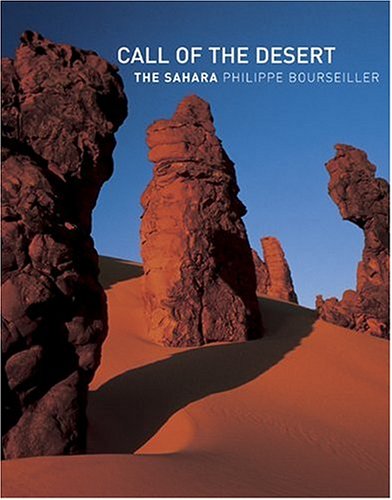 CALL OF THE DESERT: The Sahara

Award-winning photojournalist Bourseiller, who spent four years documenting the Sahara Desert, collects the best of his photographs in this huge coffee-table book. Besides the expected shots of sand, sand and more sand—which are gorgeous in scope and detail despite their ubiquity—there are a surprising number featuring sparkling water and lush marshes. The book's fold-out map reveals that the Sahara is dotted with oases and springs and borders oceans, rivers and lakes. Still, water is a precious commodity in the desert, and Bourseiller reveals both its value and its scarcity in the lives of the desert's human inhabitants. Images of fish traps, sailboats, rice paddies and lapping waves contrast sharply with rocky outcroppings, dune seas, camels and veiled nomads. The photographs, organized into chapters with short introductions written by six of Bourseiller's scientist, geographer and journalist peers, usually spill across two vivid, glossy pages. While Westerners may think of the Sahara as the archetypal desert, an untracked wasteland of sand, Bourseiller shows it both as an unforgiving environment and as a beautiful place that stretches across four million square miles and 10 countries and encompasses ancient fortresses, hardy plants, thriving fishing villages, green farm fields and endless starry skies.