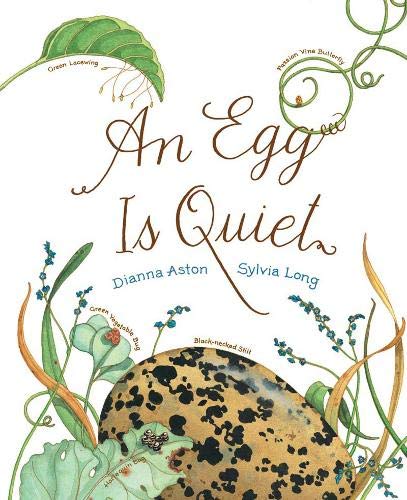 An Egg Is Quiet

Like the subject matter it describes, this book packages with understated elegance the substantive matter found within it. "An egg is quiet. It sits there, under its mother's feathers... on top of its father's feet... buried beneath the sand," Aston ( ) begins, as spot illustrations zero in on a hummingbird, emperor penguin and sea turtle, respectively. The narrative then launches into a kind of survey about the characteristics of eggs, which follows a simple format. In most spreads, different adjectives (colorful, shapely, textured, etc.) complete the sentence, "An egg is...." This repetitive rhythm contrasts with the visual variety of the illustrations. Long's ( ) skilled use of contrast and compositional balance prevent monotony. For example, a border that resembles a color test pattern runs down the outer edges of a spread of nearly 40 carefully placed "colorful" examples, set against a white background, which dazzle the eye. The main text appears in large, flowery cursive, while a smaller printed typeface serves as labels and brief factual captions. "An egg is clever," in fancy script, for instance, sits alongside examples of camouflage: "An egg might be speckled to resemble the rocks around it." The letters' dramatic curlicues mimic curvy grasses and vines dappled with tiny insect eggs. Long introduces breathtaking color into the final spreads, as a concluding scene "hatches from" this peacefulness, reminding readers of an egg's purpose. This attractive volume pleases on both an aesthetic and intellectual level. Ages 5-10.