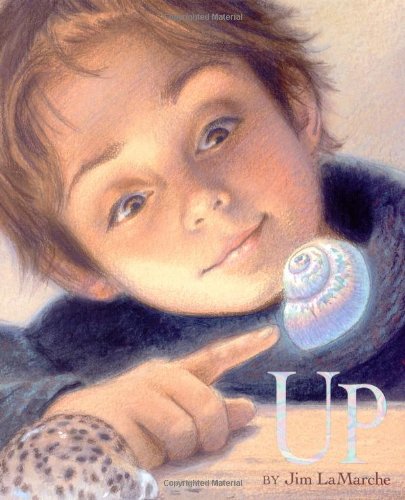 LaMarche ( ) gives his hero just one, strictly limited magical power. Daniel discovers that he can raise things off the ground by looking at them, but "never back and forth. Just up. And that, not much." The youngest son of a fisherman whose livelihood requires strength, he resents his nickname, "Mouse," and chafes at being left home while his brother helps on the boat. But once Daniel realizes he has lifted an oyster cracker with his will alone, he spends hours perfecting his new skill. The story unfolds in a series of cinematically paced scenes. LeMarche shows Daniel close-up as he practices on progressively heavier objects, then provides readers with a big smile—a spread of Daniel's dad asleep in the living room, a newspaper across his lap, looking just like any other napping dad, except for the fact that he's hovering inches above the sofa. When a whale is beached near their home, the boy's gift frees the whale and wins Daniel a place on his father's boat. LaMarche's power to draft and tint his compositions appears almost casual; there's nothing, it seems, he can't draw. He depicts all the people and objects in the book, whether on the ground or suspended in mid-air, with the same enthusiastic objectivity. This matter-of-fact quality contributes to the story's magic. Ages 3-8.